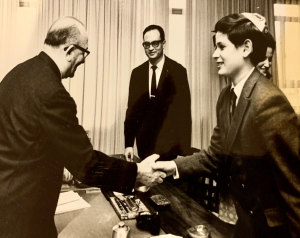 13-year-old Lenny Gordon meets Israeli Prime Minister Levi Eshkol. My mother and a representative of the tourism ministry in the background (1968).

ISRAEL: THE PLACE TO WHICH I RETURN

I first travelled to Israel with my family in the summer of 1968 as a twelve year-old.  That winter I returned with my mother as a guest of the young state for my bar mitzvah at the Kotel in a newly reunited Jerusalem.  We were chosen to be the millionth and million and first passengers to arrive at Lod Airport that year, the first time that number was reached.  We returned again the following summer and throughout my high school and college years, most summers were spent in Israel, eventually on trips with my girlfriend and later life partner, Lori.  We lived in Israel during times of celebration and mourning.  In the 1970s we were there when Israel won, for the first time, both the Eurovision song festival and the European Basketball Cup.  We were there when Menachem Begin became the first Likud Prime Minister and when Sadat came to speak at the Knesset.  And during the 1980s and 1990s we were there during waves of terror, including the bombing of Café Hillel a few blocks from our home.  When we lived in Israel for a sabbatical and our younger daughter Samara went to an Israeli school, her 6th grade class had never been on city buses because of the Intifada.

Israel is home to much of our extended family.  On Lori’s side, immigrants to Israel in the aftermath of the Holocaust, in my family, mostly American and Canadian immigrants from the 1960s.  We have close friends in Jerusalem, we have a synagogue there we call our own, and restaurants and coffee shops we look forward to visiting.

This May, for the fourth time, Lori Is bringing a group of students from Northeastern University to visit Israel, travel around the country and take two courses during the five weeks of their trip.  I will be joining her for the last four of those weeks, taking my first vacation since becoming your rabbi last August.  My task on the trip is to teach about the religions of Israel and how they coexist, especially in Jerusalem, where one can feel the transition from Muslim Friday, to Jewish Sabbath and Christian Lord’s Day on Sunday.  The group will start in Jerusalem, head south to explore environmentalism and peace building in the Negev, head north to see the ancient cities in the Galilee, and then end our trip in Tel Aviv, visiting museums and beaches, studying the architecture and learning about modern Israel.

Israel is the land to which I return, the place where every street has memories of different moments in my life and my relationship with Lori.  There is our first apartment when we were seventeen and our more recent homes from trips taken in our 40s and 50s.  In recent years, I have had the chance to see Israel afresh through the eyes of Christian clergy as a teacher on interfaith trips.   This time I will be seeing new dimensions of Israel with Northeastern undergraduates, most of whom will be coming to Israel for the first time.

While I am away, Rav-Hazzan Sokol and our rabbinic intern Jessica Lowenthal Weber will be available to meet your pastoral needs along with rabbinic colleagues who have agreed to step in as needed.  Our office can answer any questions you might have.  I can always be reached by e-mail (though I may be a bit slower to respond).  I look forward to reporting back about my most recent experiences in Israel on my return in June.